I know that there has been a lot of talk about the EU and Brexit and you've probably heard enough about it last a lifetime, but this blog is partially to allow me to process and talk about my life, and I have been following the referendum with great interest and worry.
(And unfortunately, this is going to be something that effects us for a long time, so you might as well get used to the term Brexit because, as cringeworthy as it is, it’s not going anywhere.)

I'm pretty heartbroken about us leaving the EU. I've never enjoyed change, although I am pretty good at dealing with it regardless, but i think, for me, this type of change has been more difficult than it might otherwise have been.
Had this referendum been about moving forward in unity and peace, of finding new ways to improve the world, then I might feel differently. But this doesn't feel like a step forwards, only a step back.
We've chosen to close ourselves off from the world to try and protect ourselves from unifying changes, and choose a nostalgic world view over a wider picture.
Generally, I'm a big fan of nostalgia, I love 50s fashion and antique items of furniture, but I am careful to fully understand the political situations of those periods. I never say I was born in the wrong era, for example, because while I love dressing like I live in the 50s, I would never want to live a society where there was so much social inequality; for women, people of colour, LGBT people and immigrants.
Nostalgia is only good as long as you recognise a period's faults as well as its positives, otherwise it's just stagnation.

I am also very worried for all my friends who have joined us here in the UK, to live and work, and what this result might mean for them. I don't want them to leave, or feel that they're not wanted, not only because they are some of the most amazing people I know, and that they make this country better, but because no one deserves to be shunned for who they are or where they come from.
Although I believe most people who voted for Brexit are not racist or xenophobic, those that are have taken this collective decision as validation for their own foul beliefs, and there have been many reports of aggression and hatred, to and from people of all ages, to immigrants, and people of colour regardless of their nationality and that's horrifying.
This behaviour is completely unacceptable and it breaks my heart to see that a group of people are considering the UK's decision on Brexit as outright encouragement. They believe that 52% of the country agrees with them in every way, and that should anger the Leavers as much as the Remainers.
(I would briefly mention here that all such acts are classed as hate crimes and should be reported as such.)
Being half Bulgarian, and having a Bulgarian surname, doesn't help either. I might have been born here and lived here all my life, but I doubt that would matter too much to the people responsible for these attacks. Especially as I'm on benefits.

Another fairly large part of my worry (and my remain vote) was that I knew that a lot of the laws that protect disabled and sick people like me would be rewritten by the government.
We currently have EU guidelines for conduct of disabled people, and our own laws have grown and changed alongside the EU's, as you might expect.
Even with these guidelines and protections in place, the UK government has not always abided by them as well as they should have, and has often left those in need to struggle.

Now we've come out of the EU, our entire legal system will be in upheaval as the government decides on huge swaths of laws, likely without going through parliament (there's just too many to do this).
I can't help but think that this is incredibly undemocratic and could lead to some difficult times for certain groups of people in the future, if they're not properly regulated and the changes aren't made transparent to the public.
If not, I will be completely unsurprised if it leaves the most vulnerable, more vulnerable than they already are.
We know now, of course, that any suggestions that were made as to sums of money that might be spent on the NHS, were just that; suggestions, and have now been debunked by both Farage and Iain Duncan-Smith. The other main draw of the Leave campaign was of course to cut down immigration, and that’s been debunked by Daniel Hannan.
Politicians are so very good at making it sound like somethings been promised when it's only been heavily implied (and unfortunately that makes all the difference when it comes to consequences for said politician).

(On a side note, I'm always surprised when anyone other than the rich vote for right wing governments, especially given the respect and dependence we have on the NHS in this country. Everyone always seems so surprised when history repeats itself and they give business and the rich an easy time and come down hard on the health service and the poor and vulnerable.
The whole ethos of the right wing is the priority of capitalism over socialist ideas, business over the welfare state (and, as an extension, the people reliant on it). As despicable as that might sound, that's what, at it's core, right wing politics is based on. That's why most conservatives MPs are from wealthy backgrounds, they've often never had to worry about what would happen if the NHS crumbled, because they can afford private healthcare. They know that the people most likely to do the biggest business and make the most money are those that are already wealthy, so they do everything they can to incentivise them.
Of course not all politicians, or all conservatives are bad, but... these are the facts. People may be in different places on the spectrum, but right wing politics put business first.
If you were wondering why I'm so sure that's what will happen in the event of further cuts and legislation, that's why; an extremely long list of examples through history. That and personal experience.)

There is of course, the domino effect of right wings groups around the world now calling for their own referendums. I've got mixed feelings about this one: I don't want our decision to shatter the EU (and potentially its continental peace) under any circumstances, but, as someone living in Britain, I also hope that we don't have to become too much of a cautionary tale in order to prevent that from happening.
I don't think the EU is perfect, by any means, but it sprung from a noble idea, to keep Europe from war, and I'm sad, embarrassed, and a little ashamed that we've elected to leave that behind.

Provided the EU is able to weather the storm, I actually think Brexit is a good thing for for the rest of the member states. Britain has always kept itself at arms length from the EU and that must be incredibly frustrating, especially when you're trying to get stuff done.
I just hope the decision to leave, and the continued general arseholery from Farage, doesn’t leave the EU with such a sour taste in it’s mouth that it refuses to work with us in the future. There are so many of us that don't want to leave, and I hope they'll remember us in their talks.

As much as I’d like a second referendum (one where people actually vote for what they want to happen rather than using their democratic power for “protest votes” and then being shocked when the thing they voted for happens), I do think it’s very unlikely.
Even if people regret their actions, everyone was given access to the same information, and the same opportunity to vote for their chosen decision, despite the lies that were peddled and the warnings that were given.
Unless the petition for a second referendum gains more signatures than the 17 million people who voted to leave the EU, holding a second one would be changing the rules retroactively.
There is of course a possibility Brexit can be blocked by parliament; it is only advisory after all. I’m not sure whether it’ll happen, but we can only hope.
We know Nicola Sturgeon plans to fight tooth and nail against leaving the EU, and would rather break the union of the UK and go for Scottish Independence before Brexit happened, but we’ll just have to see what happens.
I wouldn’t blame Scotland, or Northern Ireland, for wanting out of the UK after the appalling display from the politicians in parliament following the referendum result. Maybe if I ask nicely they’ll take me with them.

If there's one thing this whole debacle has taught us, it's that a vote is not a toy or something to be taken lightly.
Whatever your situation, or your politics (and in light of the upcoming presidential election in the US, I'm particularly looking at you, Americans), you should never vote for an outcome (even in protest) that you would not be 100% happy to live with.
People have made that mistake here, assumed that their vote held no power, found that that wasn't true... and now we must all deal with those consequences.
As I read online recently, votes do have power. That's why so many countries won't allow their people to have them.

p.s. here are a couple of pieces I created post-result, the first in anger, the second in appreciation. It gave me some nasty Payback, but I felt so emotional I just had to draw something. They’re also available as t-shirts, bags, mugs, and stickers on my redbubble page. 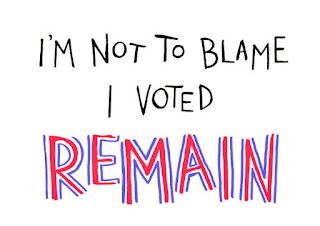 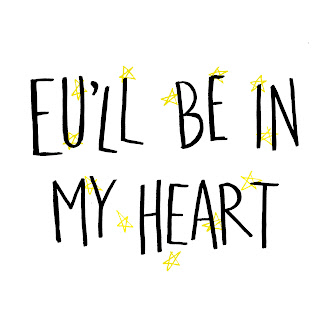 Posted by Hannah Radenkova at 17:33 No comments:

Here’s a few photos from Gung Ho! The fun 5k run (complete with inflatable obstacles) that my friends Catie and Ben did last month, to raise money for ME Research UK!
They raised a whopping £434.95! 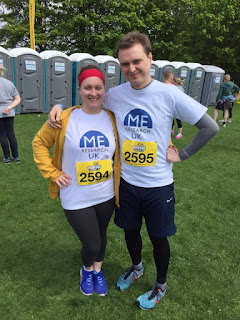 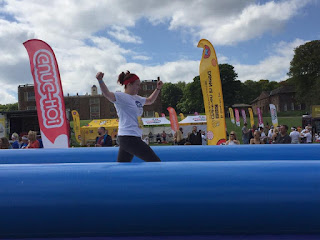 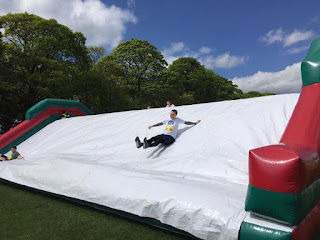 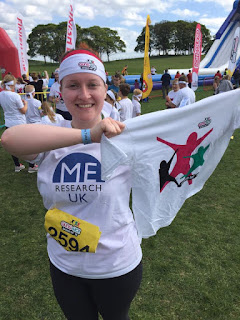 Victory!
Posted by Hannah Radenkova at 17:22 No comments: