I have been given this product as part of a product review through the Chronic Illness Bloggers network. Although the product was a gift, all opinions in this review remain my own and I was in no way influenced by the company.

As you can probably tell from the rather stern disclaimer above, and the title of this post, this is my first product review! It makes me feel very fancy... like a proper blogger! (You can’t see it, but I’m totally flicking my hair right now.)
It’s actually a really good product to start on as well, because it was something I really wanted to try before the Chronic Illness Bloggers let me know the company was looking for reviewers. Double win.

One of the most frustrating things about ME/CFS is the sleep disturbance. Sleep is hard to come by, and, when you do finally manage it, it’s not refreshing. If you’ve got pain thrown into the mix, it’s even more difficult. Given that sleep is so important, it’s also really easy to get extremely nervous about not getting enough of it, so I also have pretty bad sleep anxiety as well.
Your shape and weight make a massive difference in your sleep health too. I’m a healthy weight for my height, but I am quite curvy, and predominantly a side sleeper, so if I have too hard a mattress it can bend my spine into a pretty uncomfortable position and put a lot of pressure on my wider hips and shoulders. As a result I’ve had back pain on and off long before I got sick with ME, but the ME has brought some pretty nasty joint pains with it, mostly in my hips.

I’ve worked really hard to find products and bedtime rituals that have helped improved my sleep patterns and quality (high quality blackout blinds, a softer mattress, sleep meditation, etc), but I’m always on the look out for further refinements.
Everything I’ve tried, I’ve had to try very carefully and slowly, so as not to upset the balance so much that I trigger my insomnia or sleep anxiety.
I do still get terrible pains in my hips even with those alterations. It’s not constant, but when it does happen it's like having something gnawing on my joints when I’m trying to sleep, and sitting or lying on hard surfaces make it a thousand times worse.  Hot water bottles do help, but that’s not really an option in summer, so I was really hoping the N:Rem topper would make that extra difference.

N:Rem Sleep Systems are a company that creates mattresses specifically for people who suffer from chronic pain. The mattress (and the topper I’m reviewing) have different tablets of foam in different densities, that you can swap around to make sure the areas that need support or added softness have the best possible option for a good night’s sleep. Sounds good, eh? 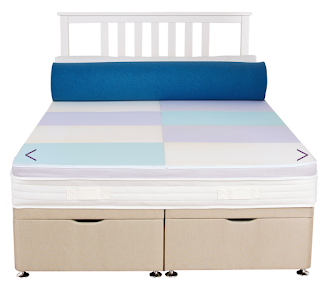 The topper itself is now no longer available, but the mattress includes the same components within the top third. Below that it’s a pocket spring mattress.

There’s a 90 day trial on the mattress (which is pretty fantastic), finance options are available to make it more affordable (always good), and the company (who give part of their profits to charity) deliver and personally set up your mattress with it’s foam components in a suitable configuration, and will take your old mattress away for free, so I was pretty impressed with all of that.

Before we get any further, it’s got to be said, that my experiences with the topper itself weren’t as great as I was hoping, BUT, before you stop reading and write it off, I’d say that I think that that’s probably due to my specific problems rather than any fault of the product. In fact, most of the other nine reviewers loved their toppers, and after my false start I gave it to my step-sister to try (who also suffers from chronic pain), and her experiences were pretty much all positive.
Also, the company themselves were never anything other than professional and really helpful.

In terms of general tips and feedback on the mattress I’d say the following:

The smell of foam isn’t too bad, but I left mine out for three days rather than several hours. If you have really bad smell sensitivity I’d leave it a bit longer. You’ve got 90 days of trial on the mattress, so there’s plenty of time for airing.

The cover feels nice and is a tight fit (presumably to stop foam shifting), but it does snag rather easily so watch out for that if you’re moving it around yourself.

The topper didn’t have any handles, which was a major downside, but, from the images on the website, this is something they’ve fixed in the mattress, so that’s great.

The zipper got stuck a couple of times when altering the foam configurations, so hopefully when adding the handles they also added an extra line of stitching to stop the loose edge of the zip getting folded back in on itself and getting stuck in the teeth. If not, that’s a major feedback point for me N:Rem! 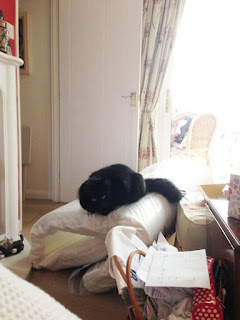 I also spoke to company about the potential for swapping or buying extra foam tablets, and they do swap tablets during trial period for free. After the trial period, extra tablets are £20 each, which I think is really reasonable. It's excellent that the company offers this option to allow for more personalisation of the mattresses, especially if more than one person is using the mattress and they have different requirements.

In my case, I started out by trying the hip pain configuration, sent with the topper. This consists of having the firmest foam at the head of the bed, then medium, then soft (on the hip), and two super soft at the foot. (Note: the configurations have been updated on their website since I received the topper, so the new configurations are below.) 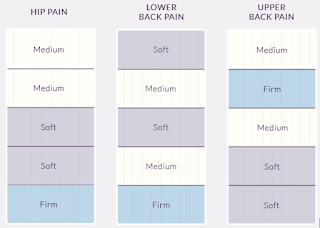 This was actually pretty good for my hips, so kudos for that, but, due to my wider shoulders (and, I suspect, being used to a much softer mattress), I found it gave me discomfort in that area instead.
I then tried a different configuration: firm, soft, super soft, super soft, medium, but there was still too much pressure on my shoulders, leading my hips to be driven further into the topper. It was better, but not ideal.
The problem was, after trying these configurations over the course of (just over) a week and not finding my optimal placement, I was getting very, very tired. And the more tired I got, the more my sleep anxiety was being triggered, and the harder I found it to sleep.
I'm pretty certain I could've have found a combination that worked with my hip pain and prevented the return of my shoulder and back pain, but, frankly, I was too tired.
I think this is where the system doesn’t work for me personally: like most things, you have to spend time trying to get it right.

Most people, even people with chronic pain, or indeed ME/CFS, can afford to have a few nights where they don’t sleep very well. I, however, cannot. My health is a pretty delicate balance at the moment, and I’ve had a lot of ups and downs recently that meant it was starting to get unsafe to mess around with my sleeping habits any more. Had it been an easier time for me in the months preceding the trial, I might have felt differently. But, in the end I had to make the executive decision to stop with the topper.
It was really disappointing, because, as I said, everyone else was raving about it, and I’m sure that if I’d been able to find the right placement for me, I would’ve benefitted from it.
Instead, I decided to send my topper to my step-sister, who also suffers from chronic pain (although hers isn’t ME related). She also has tiny shoulders, so I had great hopes for her experience.
Here’s what she had to say:

"I have suffered with chronic back and hip pain for the past year and have struggled to get a good nights sleep, so when asked if I would try the topper I obviously said yes.
Putting the topper together was not as hard as it first seemed and took around 20 minutes, and once it was on the bed it felt very comfortable.
After the first nights sleep on it I did not really notice a difference, I still felt tired and stiff as usual upon getting out of bed, but I found that after the 3rd night sleeping on it I was not as stiff and started to feel more refreshed in the morning so I assume I must have slept well.
I have continued to notice less stiffness after a nights sleep and although it still takes me a while to get comfortable enough to sleep, I do feel that I am getting a better, more restful nights sleep.
I would recommend this topper to a friend with back or hip pain, I have found it very helpful."

I think for many people this topper (and mattress) would be amazing, it’s just that my particular circumstances have meant that it hasn’t worked in the same way for me as it has for others.

I can easily imagine plenty of scenarios in which the topper would work really well for me: if I was heavier and sank into the foam more, or had smaller shoulders (or was less curvy generally), had come to this topper from a firm mattress rather than a soft one, didn’t suffer from insomnia or sleep anxiety, had energy to spare to move the tablets around more often, or was just able to allow a few nights in order to let my body adjust properly, I can see why this would be a great product. It’s just that my particular mix of issues have made this difficult.

I think, on the whole, the N:Rem system is worth a try for chronic pain sufferers. There’s a 90 day trial period, financing available, and you can swap the tablets around, so if you keep your old mattress when the new one is delivered and decide it’s not for you, you haven’t lost anything, and you haven’t had to make a large payout to try it in the first place.
And if it does work for you, then, well… a good night’s sleep is worth it!

To check out N:Rem systems, head on over, here.
Posted by Hannah Radenkova at 09:20