Sorry for my absence, the top secret project I mentioned before is in it's final stages now, so that should make things a bit easier. I've also been drawing a bit more, which has just been FANTASTIC.
I can't tell you how wonderful it is to feel able to do that.
After a bit of a splurge where I got very excited about the whole thing (and its corresponding payback), I've limited myself to half an hour a day, and that's meant that I'm able to do some fairly regularly, without overtiring or overstimulating myself.
This small but meaningful victory has meant that I felt able to enter another competition.

Like many of my wonderful friends, my friend, Catie, has been incredibly supportive throughout my illness. She and her fiancé are raising money for ME Research UK this year for me in the Leed's Gung Ho event (5k of inflatable obstacles, and decidedly not for the faint of heart).
There was also that time I freaked them both out good and proper by having an emergency shutdown at their house that was so severe my parents had to drive to London from Norfolk to come and get me. Oops.
Unlike many of my friends she's also getting married this year, and, if I was well, wild horses couldn't keep me away.
Unfortunately, I'm not well, and even though I'm due to be a bridesmaid, we've had to slowly let go of the dream that I'd be able to make it in person, unless there's some kind of minor miracle between now and October. There are video calling based back up plans, of course, but it's been pretty hard for both of us.

When I saw a competition on Top Vintage's website to win a vintage style swimsuit and a holiday I was all for it. I couldn't go on holiday (although I'd happily take the swimsuit!) but Catie and her hubby Ben could.
So I did a bit of surreptitious digging to find out where they fancied going and created the following image... 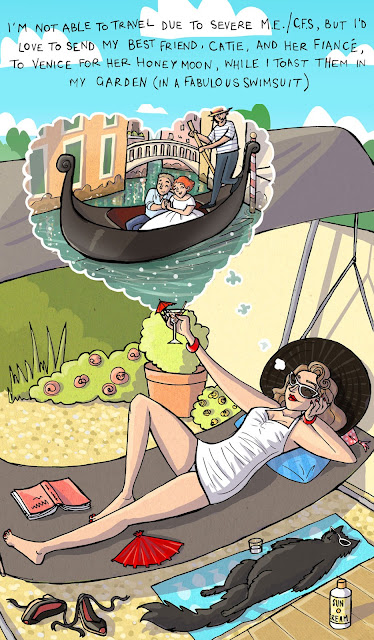 A few days later, to my absolute astonishment, I found out that I'd won and that I'd be sending Catie and Ben to Venice for a week for their honeymoon!!!

Telling your friend that you've won them a honeymoon is pretty much the best feeling ever.
I (somehow) managed to keep it a secret for the five days it took for the win to be confirmed and for Catie and Ben to be free for a video call at the same time.
(I say I kept it secret, I compromised and told several of my other friends in the hope that it would stop me exploding with excitement. Fortunately, it worked.)

Their reactions were fantastic. I'd tried to record it, but had technical difficulties, so you'll just have to believe when I say I've never seen two people more blindsided. Once it sunk in, they were ecstatic, and now they're really looking forward to it.
I can't tell you how much it means that I've been able to give them this, especially as its so unlikely I'll be able to make it in person on the day of the wedding, so a heartfelt thank you to Top Vintage for making this possible.

Not having to look for a wedding present is pretty fantastic too.