Every now and again I have days where it's a lot harder to be housebound than others. Days when I want to eat my weight in chocolate, and cry, and smash things.
It can be a dream that sets me off, particularly one where I'm healthy that makes me remember exactly what I'm missing; a comment or question someone's mentioned; or even just the weather.
Some days it's just harder.

I recently did a post about my new sense of determination, and that I was going to use that sense of determination to get myself a reclining wheelchair so I could get out of the house.
I actually already have one. It went far, far quicker than I thought it would, and a battle I thought I was going to have to fight for most of the year was over within the span of a few weeks.
Go Team NHS.

I had an appointment with the local Wheelchair Service and, although I don't think he completely understood the situation, the Wheelchair Man was willing to get me a new wheelchair of the same model as my previous one, but with raising leg rests, a reclining back, and a better headrest so I could try it out.

I had a few tears, both because I had become really nervous about the appointment and having to explain my situation to someone new (never fun) and was relieved it had gone well, and because there's still a part of me that can't believe that I actually need a wheelchair.

I countered this by coming up with some new names for my new wheelchair. The old one had been called Gavin, but I felt this one should have something with a little more pizazz. And preferably some kind of pun or geeky reference.
The options included:

The Delorean (suggested to me by a friend)

Mustang Hanni (thanks for that one, Mum)

Hannah with the good chair

River (as in "Rollin' on the...", another friend's suggestion)

Despite these names, I was trying not to get my hopes up too much, which, it has to be said, I failed spectacularly at.

In my heart of hearts, I was hoping that I'd get my chair, and be able to go outside immediately, weather and spoons permitting.
I could feel that grass on my fingers. (Not on my toes, because it's still flippin' freezing, and I'm not taking my thermal socks off until at least June.)

The chair I have currently is much, much better than my previous one, but I'm still going to have to train to be able to use it. And when you've been waiting as long as I have to leave the house, and it takes as long as it does me to improve physical strength and stamina, that's a big deal.
Emotionally and mentally I am ready to be out there, but my illness and its accompanying physical condition is holding me back.

The headrest isn't particularly comfortable and is really designed to keep your head as upright as possible, which is great for most wheelchair users, but isn't really what I need to be doing.
It's a bit like a car seat headrest, and we all know how comfortable those things are. They’re basically there too make sure your head doesn’t snap back too far in case of a head-on collision. My parents may not be used to pushing a wheelchair, but I doubt it’s going to come to that.

Again, it is better than the previous one, and it is somewhat adjustable, but the Wheelchair Man forgot to leave the allen key for it so we'll need to contact him again before fully deciding on whether it's suitable or not.
Either way, I'm going to need to build up my neck muscles and potentially wear a neck cushion when in the chair.

The raisable leg rests are good, if a little short in the leg for me. (The curse of being a tall person. Mum may complain that the family's long legs skipped her, but sometimes they're more trouble than they're worth!)

The reclining back is okay, but doesn't quite go back as far as I need to be fully comfortable, so I'll need to build up my back muscles and my overall ability to tolerate different postures.
(We think it's likely that I've developed a mild form of POTS, which is pretty common among ME sufferers, especially those on the more severe end of the spectrum.
It basically means I find it difficult to hold certain postures because it sends my blood pressure and heart rate all over the place and I feel very dizzy and faint. That's why I can walk short distances but struggle to stand up still. It's also why I need the leg rests.)

There's also another slight problem; because the chair isn't a fancy tilt-in-space chair, it has a fixed point of balance, so when my weight in on the reclined back it makes it a bit unstable and liable to tip.
There are stoppers (a bit like stabilisers) to stop it tipping over completely, so I'm not going to get hurt, and having the leg rests raised does combat this a little, but we'll have to be very careful with it, or I could go backwards like a kid in a pushchair with too many shopping bags on the handlebars.
(The Wheelchair Man did demonstrate this too me, and the sensation brought back a lot of early memories.)
It does, however, mean that we're not meant to recline it very far when it's being pushed, which, frankly, we're going to have to ignore if it's to be of any use at all, because that’s kind of the point of us having one.
It is so much better than my other one... but there's just a host of other problems. It's just all very frustrating.

I, of course, didn't actually get to say any of this to the bloke, because I was far too knackered after sitting in the thing for a few minutes to have the strength needed to be able to articulate this to him, particularly as he didn't know anything about ME and the bizarre requirements us sufferers have quite outside regular wheelchair users.
I'm also pants at sticking to my guns in these situations.

After all this, I thought I'd do a bit of research into other options, either to present to the Wheelchair Service, or to look into getting myself.
The problem I've found, is this.

As far as I can see, fancy tilt-in-space chairs don't actually recline further than the one I have, or at least from the ones I've seen.

There is a normal style wheelchair that reclines to horizontal and has a flat headrest like a lounger chair, but it would have the same problem with instability, and one thing the Wheelchair Man mentioned in passing: the handles on wheelchairs are behind the head or shoulders. When the wheelchair is reclined, the handles to push it become basically inaccessible.
Wheelchairs are not designed to be moved when the user is reclined. Which is where I excuse myself to go and swear like a sailor for a few minutes.

Basically, what I really need is an adult-sized buggy. 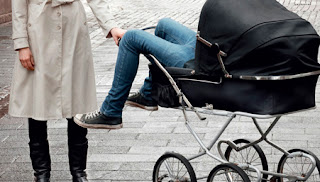 Thank you, Google Image search, for providing this.

As far as I'm aware, that doesn't exist. (Although if anyone knows of anything, then feel free to correct me.)
At this point, I'm genuinely considering lashing several skateboards together and rounding up the local dogs to create a makeshift sled team.

So, today is hard, and if I don't seem to want to talk about wheelchair things, then that's why.
But tomorrow will be better. And in the mean time? There's chocolate. And Mum even has a couple of old flower pots she doesn't need anymore. Smashy, smashy!

H
Posted by Hannah Radenkova at 12:28