What no one tells you about being Housebound

Whether you're housebound some or all of the time, here are some things you might come across.

The five years I've been housebound feels simultaneously like no time at all, and an eternity. I regularly get my own age confused. When did that thing happen I thought was last week? At any point during the last 6 months, that’s when.
It’s like that weird haze between Christmas and New Year but ALL THE TIME.
The only reason I have a fighting chance of knowing what day it is is because of my pill box. And the alarm to remind me to take them, because what time is it again?

Would I rather be leaving the house? Yes. Does it make me feel much better that I can’t when Monday rolls around and its battering down? Also yes.

3. You will feel differently about the days.

You know what happens on Sundays? Bugger all. Limited access to services, no post, and everyone starts mowing their lawn. I used to love it, but now… HISSSSSSSSS!
By contrast, Mondays mean you have better access to the world, in whatever limited capacity you get it. Now I love them.

4. Someone will say “I wish I could stay at home all the time.”

Someone will say this. It could be a stranger delivering something, it could be a medical professional, it could be a loved one, but someone WILL say it. And, for a split second, no matter how well you may know and/or love them, you will contemplate murder.

5. You feel voiceless and vulnerable.

Your entire existence becomes dependent on the goodwill and efficiency of others. If someone messes up, you’re the one who suffers for it, and you have very few viable options to fix it yourself, or to make sure it doesn’t happen again.
When you can’t leave your house it’s harder to make yourself heard, or to exact change in your life or the world, and that sucks.

I miss supermarkets. And train stations. And walking along in the autumn feeling the cold air on my legs.
All those really mundane, boring parts of life when you’re travelling or doing a chore you’d rather not do… you don’t realise how much of LIFE that makes up until it’s not there anymore.
Photos of exotic locales on instagram don’t hold the same sway because those always feel like a snapshot of someone else’s life. I miss my life. I miss train stations.

However boring and isolating you’d think it would be, times it by 1000. Again, you don’t realise how comforting seeing different faces is until you don’t anymore. Even if you never actually spoke to those people. I spend 95% of my time with the same three people, and one of those people is actually a cat. And as such she’s unconscious for a fair chunk of that time.
I’m lucky enough to see a friend or two once a month (or two, if I’m not doing to so well and need a break). Before, even if I didn’t get to socialise as much as I wanted to, I still saw people.
I can and have gone months without seeing another person outside my parents, and due to health constraints, not even seen them very much. Even on good days, they have things they need to do, especially if they want to keep me as healthy as possible.
I love Thursdays because our helper lady comes round. And I love getting post because then I can say hi to the postman. Sometimes there’s a new courier! Much excitement.

Living like this pretty much comes down to being able to distract yourself. Through meditation, books, crafts, using social media, even daydreaming. There’s a weird guilt that comes with not doing anything you can perceive as productive (thanks for that one, Capitalism) but honestly it’s the only way to cope.

It’s entirely possible people could do this on their own, but it would be so much more difficult. Without support and understanding it would be very easy to develop anxiety and depression and then have a whole new set of issues to deal with. (If those aren’t the issues that led to you being housebound in the first place.)
If you, or someone you know, is partially or completely housebound then I’d really recommend not only for friends and family to support them (or you), but for them (or you) to consider researching options for professional mental health support. I have two, plus the two medical professionals who focus on physical issues. There’s no shame in it, and if your body isn’t playing ball then your mind needs taking care of just as much. I see the mental health professionals far more often than the physical.
It’s not easy to deal with, so get people to help with it.

I kind of hate bringing it up, because really, what a crappy trade-off, but you do appreciate small things more. When I first felt grass on my feet for the first time in three years I cried, even though I'd only been wheeled 25m from my door. Standing briefly outside in the rain took on a whole new meaning once I’d been inside for so long.
However, that’s a personal thing. Please don’t tell people they’ll appreciate things more like they should be grateful for it.
It is a very small thing to have gained when the price is freedom, so let them feel that when they feel it, tell you when they want to share it, and let them come to it in their own time.

11. You will laugh at people who are “Stir Crazy"

During an illness or an injury, or during the aforementioned period between Christmas and New Year, people will complain of being stir crazy. It is their right to do so. However, it is the right of any housebound person to laugh at them and think “oh, you sweet summer child." 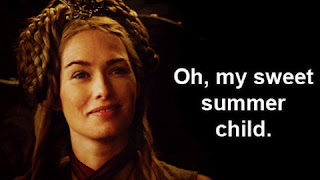 (The cultural significance of GOT has passed
now but sod it. Nothing explains the feeling better,
and the passage of time is screwed for me anyway.)

Most people will say they couldn’t manage being housebound, and they probably think it’s true. They’re wrong. They could. If they had to.
Humans are extremely adaptable. It’s a different normal, and honestly not a very desirable one, but people always underestimate how easy it is for things to become your new normal. It might be hard, and you might get angry and upset, you might need a really good support network, but you’d do it.