The PACE Trial Fiasco (for ME Awareness Hour blog)

This piece was written for the ME Awareness Hour blog, and you can see it in it’s proper home, here.

It’s been a bit of a week filled with an odd mixture of happiness and righteous indignation for us spoonies, because the truth is finally starting to come out about the infamous PACE Trial… but it’s also been a long, exhausting road.
Pretty much all ME/CFS sufferers know all too well what the PACE trial is, but in the interest of friends and family who might not, let me break it down for you.

The PACE trial, run by Queen Mary University London (QMUL), was the biggest study ever into ME/CFS, with over 600 participants, looking into different methods used to "treat" ME/CFS. (I put treat in inverted commas because "manage" would be more accurate, as there’s no treatment for ME/CFS as yet.)

The trial looked at specialised medical treatment (SMT) on its own, and SMT with either CBT (Cognitive Behavioural Therapy), GET (Graded Exercise Therapy), or APT (Adaptive Pacing Therapy), and their outcomes were published in the Lancet in 2011. It was publicly funded to the tune of five million pounds, and the results have influenced the medical treatment of ME/CFS sufferers ever since. Before the trial was even finished, the NHS announced it would be using the methods from it to treat patients.
It’s also probably the biggest load of twaddle ever to give ME/CFS sufferers (and decent scientists, statisticians, and medical professionals) a headache.
I think Dr. David Tuller, of the University of California, said it best when he called the study “a piece of crap.”

(He also wrote a pretty amazing three part article on the whole thing - far better than I could ever hope to produce - so, if you want to go into detail, I suggest checking it out here.)

White et al, of QMUL, had hypothesised that ME/CFS wasn't actually a disease in and of itself, but that people, after suffering an illness, would get stuck into a psychological state where they believed exerting themselves would make them ill, and that the physical symptoms were just the deconditioned state of the body. I don't need to tell you exactly how ridiculous that is to me, particularly given both the research showing that, yes, it is a physical disease, and my personal experience. How physical deconditioning would've given me the hearing of a bat, for example, I have no idea.

When it was published in the Lancet, in 2011, the study purported to have found that CBT and GET were the most effective treatments, where CBT gave an recovery rate of 59% and GET gave an recovery rate of 61%.
This seemed a little strange, as previously the general consensus of sufferers was that CBT and GET either didn’t really do anything, or actually worsened their symptoms; hardly surprising as they’re really designed for dealing with psychological illnesses and physical reconditioning, not for a physical disease that targets your energy reserves.
The media, however, lapped it up, and, yet again, sufferers were forced to see and hear headlines telling us we just had to think positive, exercise more, and ultimately try harder not to be ill.

However, those following the trial quickly realised that not all the results made sense. Participants were deemed ill enough to enter the trial if they scored 65 or under on a well known scale of physical ability, called SF36PF, or Short Form 36 Physical Function Subscale (where 0 is highly disabled, and 100 is completely healthy), but, when published in the Lancet, 60 was deemed to be “the normal range”. The participants’s physical health could actually worsen during the trial and they would still be counted as being in the normal range.

If 60 was “normal” for healthy people, (or "recovered", the term they used later) then why were people who counted up to five points above that allowed to enter the study in the first place? 13% of the people in the trial were counted as recovered in two areas of its tests before the trial even began.
Obviously, that seemed rather odd, so many people asked questions, both in the medical profession and otherwise, and other inconsistencies and bad scientific practices emerged.

The level of recovery had originally been listed as 85 on the scale of physical ability, but was later dropped, with 60 becoming "normal", later implied as "recovery". 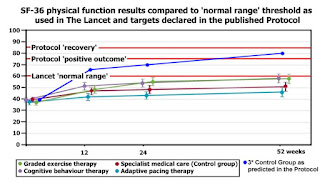 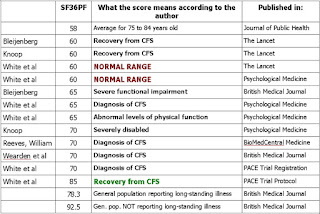 Graph and table from Peter Kemp blog, with permission, link below

The participants were given literature halfway through the trial informing them of the usefulness of CBT and GET in treating ME/CFS, and every participant knew which treatment they were receiving, potentially allowing positive bias towards those treatments (not to mention the possibility of a placebo effect taking place).
The sister trial, FINE's results, which was focused on housebound sufferers (who weren't all eligible to take part in the PACE trial due to not being able to attend sessions), were not mentioned. (The participants in the FINE trial found no real difference in their state when using CBT or GET.)

As I said above, the NHS publicly announced which of the treatments it would be using from the trial, halfway through the trial period, which could've influenced the participants even more. (I’ll not go into how bizarre it is to suggest treatments based on a trial that doesn’t include the worst sufferers of the condition.)

The PACE trial leaders did not properly disclose the close consulting and financial links leaders had with insurance companies when gaining consent. This counts as a conflict of interest and participants should have been made aware of this.

According to an article from the ME Association, "The trial was part-funded by the DWP, and was assessing the value of biopsychosocial interventions at the same time as the DWP was using the biopsychosocial model of disability to help justify cuts to disability spending."

All of the data published was based on subjective questions, and, although there were objective tests the trial had originally deemed suitable (walking for a set number of minutes etc), the trial leaders later deemed them to be unsuitable, even though they were the very people who had chosen them in the first place. This occurred after the trial had finished.
There was a tiny graph published showing an objective step-test in 2015, but it was so small that you couldn't really get any meaningful information from it. It did, however, appear to show GET and CBT doing worse than the other groups. The community asked to see that information in greater detail, and the request was refused as "vexatious".

The community didn't give up. They kept asking, even when their questions were deemed “harassment”, and they themselves were branded “young men, borderline sociopathic or psychopathic”.

In March 2014, a sufferer named Alem Matthees asked to see the PACE trial data under the Freedom of Information Act.
QMUL still refused to publish the data and has spent £200,000 in legal fees to stop the publishing of said data, stating that they were being harassed by "a community whose members are driven to challenge the outcomes of studies with results which do not comport with their beliefs as to the causes and treatment of CFS/ME”. This was because they received so many FOI requests, and that the intent of the community wasn’t to find out the truth, but to be “vexatious”. They also counted “complaints” and “House of Lords debates” as harassment.

Fortunately, last year the Information Commissioner agreed with us, and ruled in favour of Alem Matthews, and the thousands backing him.
Last week? QMUL published some "first protocol” results, although they’ve tried their hardest not to go through with it, and it wasn’t until a tribunal upheld the commissioner’s decision they actually went through with it.

Frustratingly, it’s still not the raw data we asked for, but even the information they have released shows a two-thirds decrease in improvers.
The CBT improver rate goes down to 20%, the GET to 21%. 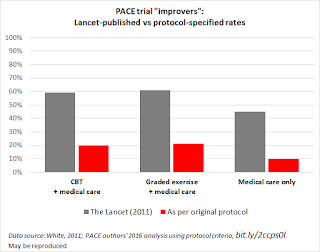 Graph from ME Action's article, link below

Not only that, but because the specialised medical treatment group had 10% improvement, the difference the CBT and GET actually made is as little as 1 in 10. Hardly the "reversal" the trial claimed. 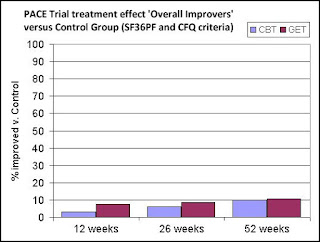 Graph from Peter Kemp blog, with permission, link below


We still don't know the rates for recovery at the rate it was originally held at (80), or the rates of people who found therapies made no difference, or worsened their condition.


I’d like to say to QMUL, and the leaders of the PACE trial, that the whole point of science is to question things in the attempt to find the truth, and that doesn’t stop just because you’re big and we’re little, and you don’t like the questions we’re asking.

If you didn't like us seeing the inconsistencies in your research, then you should have done the trial without the obvious flaws your fellow scientists have pointed out to you, so that they weren't an issue.
To say that we didn’t want to know the truth for the truth’s sake is absurd and, quite frankly, insulting, because the outcomes of this trial effect us far more than it ever will you.
If standing on one leg and singing the national anthem backwards would cure this horrible, harrowing illness, then I would do it, and I know all the other sufferer’s feel the same way.

I even think psychological tools like CBT have some uses - in helping sufferer’s to deal with their situation, if not actually doing anything to cure the original, physical problem - and I use them on a regular basis to help me cope with my illness, so it can hardly be said that I’m part of some bizarre conspiracy against psychologists or their tools.

GET I’m less keen on, I’ll admit, but that’s because pushing myself has only ever done me harm while I’ve had this disease, and surveys in the ME/CFS community agree with that view. Adaptive pacing therapy at least has the flexibility that allows the body to recover between activities.
(I’ve said before, and will doubtless say again, the only thing that’s worked for me is allowing myself to see ME/CFS for what it is - a physical illness - and resting accordingly. As soon as I seriously committed to proper rest, without stimuli or stress, I started to see improvement, and my regime of rest, careful nutrition and pacing has seen me come on amazingly in the last two years.)

I believe that the PACE trial has been a really harmful study for the sufferers of ME/CFS, leading us to ineffective treatments and further stigma. The continuation of trials using GET is ridiculous, and, what's more, potentially dangerous to sufferers.

This study is the worst kind of science, and noticing flaws does not mean we are sociopaths or psychopaths. Neither does it mean we're close-minded members of a group that's only interested in our own views.
If you're able to publicly recommend therapies that are useless, or potentially harmful to patients, based on a flawed study to further support your own opinions on ME/CFS, then I'd suggest you take a look in the mirror, because, after all, aren't psychologists meant to know all about Projecting?


If you’d like to take a look at the sources used in this piece, please head on over to the links below.

Article from ME Association: "Break Through on PACE Trial", 19th Aug 2016

Document on Queen Mary University’s arguments regarding the application of section 14 to the request, available here

Posted by Hannah Radenkova at 13:04