As you may have noticed, I haven’t been updating as I used to on Super Pooped, but, given the circumstances that everyone’s found themselves in, I wasn’t sure there was anything I could say that hasn’t already been said.

I’m quite certain whatever I write will have been said, and probably better than I could say it, but at this point, I feel as if I have to use my own words before I can write anything else.

So much is happening in the world, even outside of Covid. When so many people are yelling into the void I wasn’t sure that one voice would be noticed. But maybe it’s not about being noticed, or listened to, or understood. Maybe it’s just about saying it.

With the constant onslaught of lockdowns, and jabs and shielding I haven’t felt able to talk as much as I used to.

To be perfectly honest, with the persistent repetition of “it’s only the old, sick or disabled that are at risk” I wasn’t sure I wanted to.

That’s a phrase I’ve heard over and over and could quite happily never hear again. I’m sure everyone else who falls into those groups feels similarly. Because every time I hear it it’s a reminder than a worrying number of people would think of my death or the death of people like me as understandable. Acceptable. A foregone conclusion.

Having underlying health conditions seems to have been conflated with “going to die anyway”, and it’s infuriating.

We’re all going to die someday, mate. And technically myopia is an underlying health condition. But if you heard someone say that it’s not surprising someone had died of Covid because they had pretty chunky glasses you’d, quite rightly, think they were both ridiculous and a complete arsehole. 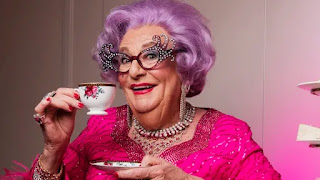 Watch out, Edna. They're gunning for you.

I’m sure plenty of people wouldn’t understand why it’s so upsetting, but all I can think of it how different it would sound if the phrase was “it’s only women who are actually dying of Covid” or “it’s encouraging that it’s only children who are the most effected.”

When someone says “it’s only the vulnerable”, I hear “and they don’t matter anyway”. That my continued life is worth less as a result of circumstances outside of my control, and therefore that I am not worth protecting. I’m not useful, so I am useless.

In the immortal words of The Muppet Christmas Carol, “if they are going to die they had better do it, and decrease the surplus population.”

Given the backlash against masks, restrictions and vaccinations, not to mention the DNR orders suddenly appearing on disabled people’s information during the pandemic, it’s not as if the words don’t have corresponding actions.

At the beginning of the pandemic I tried to take some time to put myself into the shoes of those who’d never been stuck at home before and offer help and guidance to get through it, even if it was never used. Because, despite being frustrated that so many had never noticed that lockdown is a thing that some people have to deal with everyday, yes, it’s horrible, so of course, I wanted to help.

But “it’s only.” More or less every day, for two years.

With that phrase swirling around in my head it’s been a while since I felt capable of my usual level of compassion for those not effected by illness, age or disability (with notable exceptions, of course).

So, even though I know the vast majority of people who read my blog are lovely people who don’t agree with this nonsense, I haven’t really wanted to write things attempting to make those who might well think my life worth less feel better.

And to the group of people who are ill, what could I possibly say to them that wouldn’t sound like meaningless platitudes?

Don’t listen? They don’t mean it? Try not to think about it?

What could I possibly say?

I also feel strangely guilty complaining about it. After all, in a lot of ways I am incredibly privileged. As a white cis heterosexual woman, becoming disabled has been my first foray into people thinking my life is worth less, at least openly and publicly. So many people have it worse than I do.

Misogyny is obviously a real threat, but no one has ever directly told me they think of me as less than, even if some do treat you as a surprisingly chatty piece of garden furniture.

And somehow it’s easier to deal with - maybe because it’s always been there? Or there are so many people in the same boat?

Or maybe it’s because, despite my experiences of ableism, phrases that are essentially three-eugenic-thoughts-in-a-raincoat are coming from people that I never would’ve expected.

I can discount what racists and homophobes and misogynists and transphobes say, because I can’t respect people who think of others as less than because of such things. It’s hurtful, but not unexpected. But when those sentiments seem to be coming from every part of the political spectrum? From people you would otherwise have thought of as kind? Then it’s a whole lot harder.

Over time the original message has been added to the rallying cry of “we can’t do this forever”, as a means of offering explanation why the non-vulnerable majority should no longer have to be careful on behalf of the vulnerable.

News articles and clips of people, many in positions of power advising the public, accepting a certain group as a reasonable sacrifice in an attempt to return to “normality” does seem particularly cold and calculating.

The head of the CDC recently said it was “encouraging” that 75% of fully vaccinated people that died of covid had underlying conditions.

The points at which intersectionality comes into play must be truly horrifying to withstand.

Putting ethics aside for a moment, the whole situation still seems bizarre, because anybody can become disabled or sick at any time. And... everyone gets older.

No one seems to realise when they say these things that now or in the future they’re signing themselves up for pain, hardship and a state of disposability.

A huge group of people just gained long term conditions as a result of Covid themselves. Do they or their loved ones not realise that they now fall into that group?

Even if you’re not already, at some point you will be vulnerable, and then you will be just as disposable as I am.

Disability has a knack of bringing you face to face with your own mortality regardless of any other influence or situation in your life, and that makes threats to your wellbeing real and possible in a way that seems to be entirely absent in a massive chunk of the populace.

I’ve watched friends and acquaintances post their adventures and hoped against hope that they share at least some small inkling of that knowledge to keep them safe, whilst also wishing that they never had to.

I’m very aware of Covid, and that, even if it didn’t kill me, I risk a potentially disastrous comorbidity in the form of Long Covid, or the loss of years of progress in my ME recovery that could very well leave me back where I started nearly a decade ago.

I like to imagine I’d have to strength to do it all over again, but I’m honestly not sure.

And if I didn’t, then at least it’d only be another one of the vulnerable missing, eh?

Posted by Hannah Radenkova at 14:18

View my complete profile
ME/CFS is a chronic condition that leaves it's sufferers constantly and inexplicably exhausted with a wide variety of flu-like symptoms including muscle pains, headaches, loss of short-term memory and concentration. It often means sufferers are unable to work, have active social lives or even leave their house (or in some cases, bed).
In short, it sucks.
For more information go to www.meassociation.org.uk